Many investors believe there to be a direct connection between the stock market and the price of Bitcoin. However, according to a report by CryptoSlate, the two are not correlated.

Beta, a technical financial measurement, can help measure the connection between Bitcoin prices and the stock market, such as the S&P 500.

The S&P 500 can be a reliable indicator of the entire US market and hence is a good choice as a benchmark. It consists of 500 biggest names listed on the New York Stock Exchange (NYSE).

It is common for investors to use beta as a way to diversify their portfolios. Investors can minimize price fluctuations by combining a mix of uncorrelated assets. It allows investors to safeguard their investments while also optimizing returns.

This is how to study beta:

Positive: There’s a positive correlation (when the benchmark increases, the asset also increases). For example, big company stocks usually have a beta greater than 1.

Negative: There’s a negative correlation (when the benchmark increases, the asset decreases). For example, gold generally has a beta of -1

Zero:        There’s no correlation (the price of one has no impact on the price of other). For example, corporate bonds usually have a beta of 0.

How to Calculate Beta

It can be calculated with the help of this formula:

Covariance: Defines “the measure of the directional relationship between two assets.”

Variance: Defines “how far a set of numbers are spread out from their average value.”

This is another figure that can help investors understand the connection between the stock market and Bitcoin price.

The coefficient tells how strong the connection is between two variables. Most investors opt for low correlated assets to diversify their portfolios.

Here’s how to study the coefficient:

Here’s how to calculate it:

What the Analysis Says 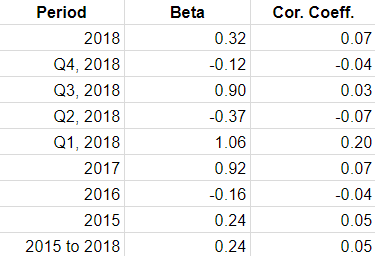 According to the analysis by CryptoSlate, the beta fluctuates wildly. Bitcoin had a beta of 0.30 in 2018. This showed the stock market and Bitcoin to have a loosely correlated relation.

However, 2017 saw different figures when the beta reached a high of 0.92, showing an almost perfect value, but also a strong relationship between the two. On the other hand, 2016 had a different story when the beta of Bitcoin was  -0.16, showing an inverse correlation.

These numbers suggest that it is unlikely the two have any correlation at all, mainly due to the price being highly volatile that makes it difficult to deduce results.

Similarly, as stated in the report, the bitcoin coefficient has had a beta of 0.24 since 2015. Based on these measurements, the study has concluded that there is no correlation between the price of bitcoin and the S&P 500, in order words, the US Stock Market. 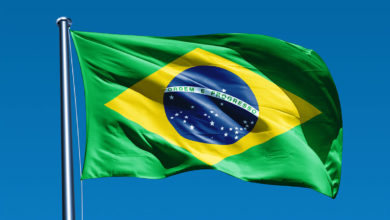 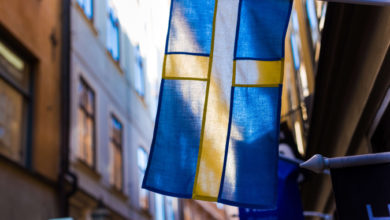