As the U.S. scrutiny in the Middle East intensifies, President Trump and his government officials decided to enhance the sanctions on Iran despite the pleas from Germany, Britain, and France to exempt the EU companies, whose business is tied to the country, from restrictions.

Donald Trump is Piling Up the Pressure

By pulling out of the Iranian nuclear deal, the controversial U.S. President keeps piling up the tension between two countries.

“As we exit the Iran deal, we will be working with our allies to find a real, comprehensive, and lasting solution to the Iranian threat,” states the official announcement from the U.S. Department of State.  “We have a shared interest with our allies in Europe and around the world to prevent Iran from ever developing a nuclear weapon, to stop its terrorist activities worldwide, and to block its menacing activity across the Middle East and beyond. As we build this global effort, sanctions will go into full effect and will remind the Iranian regime of the diplomatic and economic isolation that results from its reckless and malign activity.”

Cryptocurrencies are the Solution to Bypass Sanctions

But usually, when in the blind alley, people tend to behave progressively to find solutions for the issues they are facing.

It seems that the Iranian government is looking towards cryptocurrencies to elude the sanctions which are affecting cross-border transactions.

The head of Iran’s Parliamentary Commission of Economic Affairs (IPCEA), Mohammad Reza Pourebrahimi gave the interview to the Russian RBC, published on July 17th, in which he disclosed that the Central Bank of Iran has already begun collaborating with the Russian authorities to exchange the traditional SWIFT system with cryptocurrencies.

“IPCEA has already obliged the Central Bank of Iran to start developing proposals for the use of cryptocurrency,” Pourebrahimi revealed. “Over the past year or two, the use of cryptocurrency has become an important issue. This is one of the good ways to bypass the use of the dollar, as well as the replacement of the SWIFT system. If we manage to promote this work, then we (Iran and Russia) will be the first countries that use cryptocurrency in the exchange of goods,” he reasoned.

Hotels are Leading the Way 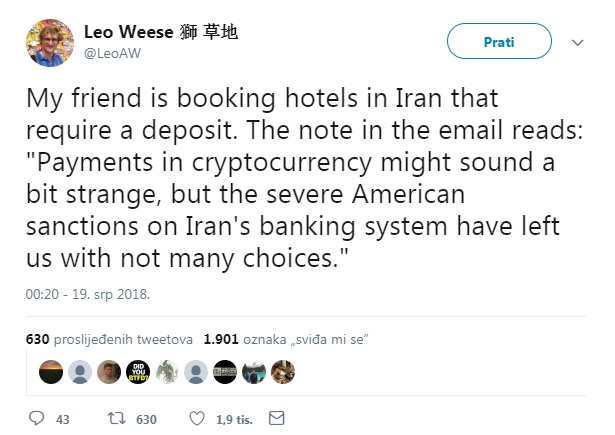 Reportedly, his friend is booking hotels in Iran that require a deposit, and they were ready to start conducting business using cryptocurrencies. Weese quoted the email from HotelsInIran: “Payments in cryptocurrency might sound a bit strange, but the severe American sanctions on Iran’s banking system have left us with not many choices,” hotels, which started to accept Bitcoin (BTC), Ethereum (ETH), and Bitcoin Cash (BCH) as means of payment, announced.

“Many people still look at cryptocurrencies and say ‘I won’t use this,’” he said. “But already in 2018 people are getting into the situation where they have to use cryptocurrencies as their only payment option, or else they can’t conclude their trade,” Weese shared his vision of how Bitcoin will eventually be adopted. 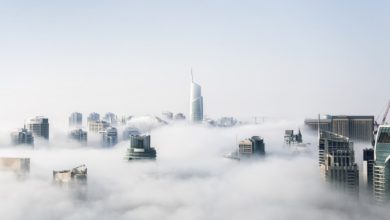